You know what time it is: Jello Shot time! And no one knows better how to make a party rocking with shots than the J-Shot Guys!

Get their summer scarf and show that you know exactly which part of the tailgate festivities are the best.

$25 each
$5 domestic shipping, or free pick up at the Terminus Legion tailgate. 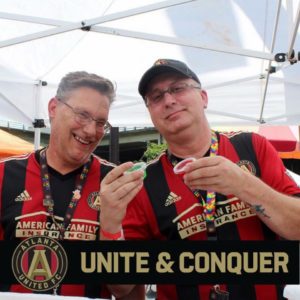 Steven McFee and Tracy Paul first brought jello shots to the pre-season match in Charleston as a fun and friendly gesture for the group of traveling fans. They went over so well they started making the jello shots for monthly regular season tailgates and the J-Shot Guys were instant tailgate celebrities!
They also provide other “edible “ alcohol snacks such as drunken Oreos, drunken gummy bears, etc.
Steven played soccer growing up and in school, while Tracy had been a Columbus Crew fan since 1996. Once their home of Atlanta had its own team, they were hooked

Scarves are expected to be available at the 7/21 ATL UTD game in the TL tailgate. If you need your scarf shipped, they will be in the mail by the 23rd.

PREORDERS ARE SOLD OUT!

Come see us at the Terminus Legion tailgate to get yours while they last!